Been a bit since I've been able to get on and post this.

The aforementioned Stalingrad event turned out to be a lot of fun, though sadly due to it starting a tad late, we couldn't finish. (Due to Densmol's prior arrangements with his inlaws for that evening)

There were 12 players at Ogre's Den in Orange Vale including the Store owner Joe who had to play ringer due to an unexpected dropout on the day. I found myself set to attack the tank factory along with a very nice chap who'd played perhaps one game of Bolt Action previously and who's name completely evades me. Our opponents were Joe and another game fellow and so the Germans and Soviets descended upon the ruins of the factory and had it out.

All started off pretty well for the Soviets with good use of terrain to cover their advances, but after a lucky hit on my partner's tank left it a bunker with a rear facing main gun, and our troops staying clear of the actual factory floor due to the Germans having both a heavy mortar AND and medium mortar AND some off-table artillery ready to light up the first sucker who rolled into the factory things ended up in a stalemate. Not a foot was placed inside the objective until the last two turns where both sides swarmed the building in an effort to hope and pray that they would be the ones left standing when the smoke cleared.

Then Densmol  realised the time and the game was called and I think overall........ it was a draw across all three tables. Not very historic at all. Good times were had by all in attendance and I have to say our end of the extra long (16'x4') table was the most fun with me and Joe giving eachother masses amount of shit each turn and resulting roars of laughter eclipsing the games on the other parts of the board.

Pics taken were not as many as I'd remembered and I blame me for having far too much fun to remember half the time and they are all out of order cos after the first pic I really can't remember which went where, but I think they are good views regardless of a gorgeous table. 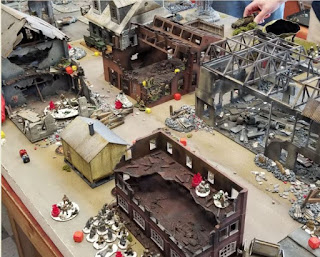 The Ogre's Den has since put on a D-Day event last month to commemorate the 75th anniversary of the largest Amphibious assault ever that seemed pretty damn good too, though you'll have to look pics up on their Facebook page as I couldn't go, sadly.

O and the KV-1 tank that I was furiously trying to get painted for the day? Well..... I failed. It got a whitewash and that was it. I aim to try to get it done before the end of the Summer though. We'll see.