My good mate Densmol gave me these to paint 4-5 months ago and I've really been procrastinating on getting them off my painting desk up until this week. but I decided I needed to remedy that so have gotten half way through already.

These are 28mm WW2 German Kriegsmarine. Naval servicemen put into use as ground troops once Hitler's half-arsed navy was no longer viable. In war, they tended to be rather untrained, but extremely stubborn to budge in the field and fought bravely against a superior opponent.

The minis are by Warlord Games and are a very characterful lot with a good mix of uniforms and water-proof jackets and trousers, helmets and caps. So far, it's been fun painting such a motley crew!

The squad Leader with the pipe and beard was already shown in a past post I believe and once the full squad of 10 are done, I'll do a post with better pictures, but these are the first 5. 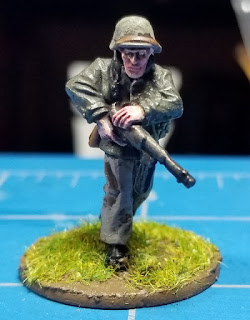