Some time back, a very lovely surprise parcel arrived at my home from a kind fellow blogger by the name of Iain. (His blog is very spiffy with some lovely armies and terrain to drool over HERE) Inside I found two old Marauder Miniatures Minotaur sculpts circa 1990 that I had owned when I was but a young teen and they were first released, but sadly since lost in the annals of time and girls and booze. Iain heard my sob story after he posted his own painted versions and sent me a spare pair of these lovely bovine warriors. Below, you'll see only one of the two painted up, the 2nd to be previewed at a later date.

Now I love these old cartoony style sculpts. Per usual, they have lots of character and this fellow looks like one heck of a thick-headed brute to me. My only complaint is that as part bull, wouldn't he be sporting a lovely pair of knackers betwixt his legs like real bulls do? Of course he should! So yeah, I green-stuffed some testicles on the bloke and made sure they were appropriately visible. (Added the same to his soon to be shown pal as well.)

Yet to name him, but if you can come up with something appropriate, fire away int he comments! 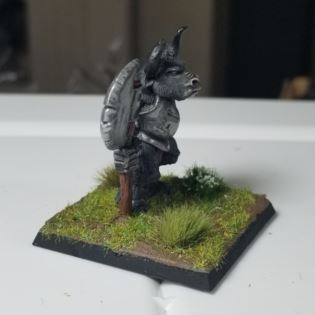 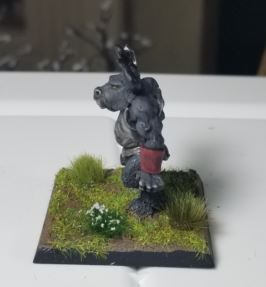 Also, I found myself entertaining a little insanity and decided that starting a new Warhammer 40K army would be a great idea! So, I assembled these two and now have the start of a burgeoning Genestealer Cult army!