This is about as "finished" as this little tank is going to get.

(If you are not aware of what the "Lend Lease Act" was, then you can read a brief history on it HERE)

A little under 1000 M3 Stuarts were sent to the Soviet Union under the US Lend Lease Act. The Soviet army wasn't the biggest fan of them though claiming they were too under-armoured, under-armed and poorly suited to the fierce Russian Winters with their narrow tracks and non-diesel engines. Still, they saw service until the end of the war serving in infantry support and recce roles.

I wanted a Lend Lease tank to represent the aid offered by the US to the then Allied effort combating Nazi Germany. I did not however want a boring Sherman... and really like the look of the Stuart's Lego-like profile. Plus in Bolt Action terms, this "Light Tank" as it's termed in-game, is way fewer points to add to an army list than a Sherman or even a Lend Lease Churchill (My favourite of all tank designs.).

The snow was added using the same recipe as my previous Winter vehicles - Army Painter Snow effect+Elmers White Glue+a drop of white paint. Apply where you think it would stick and collect. :)

*The pics are a little washed out as they were taken late at night after the snow effects had dried. 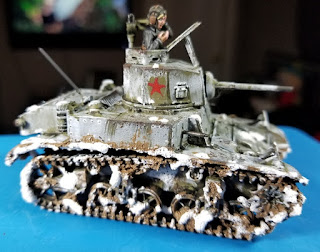 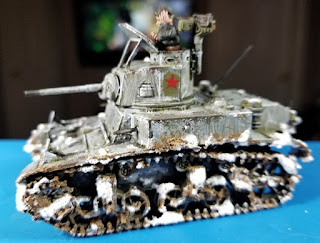 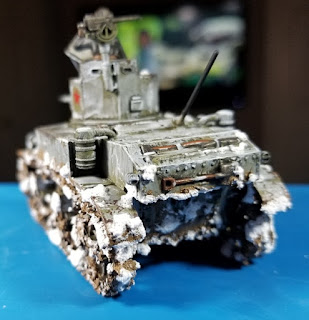 I'm looking forward to seeing what this little tin can will do on the field of battle. Death to the Kraut!
Posted by Dai at 13:23