Friday night saw Densmol and I make a rare trip down to our LGS to play some Bolt Action. We got there a little later than planned, so there wasn’t much in the way of “good” shop terrain pieces, but we made it work and the game was fun regardless.

The mission rolled up was “Top Secret”, where an aeroplane has crashed with a briefcase containing important intel on board and our forces were sent to retrieve the case and get it off our respective table-edge in order to win the scenario. In this case, we used a severed Buddha Statue head as our “crashed aircraft”, which caused much juvenile merriment.

The 1000 point lists that we brought were the ones we’d planned (And subsequently weren’t able to) bring to the last tournament and Densmol was dead set on bringing his newly painted Tiger tank to plague my poor Soviets with it’s “Tiger Fear” rule and nasty Super-heavy Anti-tank gun! Of course we subsequently forgot to apply the “Tiger Fear” rule until turn 4… The Tiger performed rather awfully and my T34/85 tank didn’t do much better (But at least wasn’t destroyed in the first couple of turns like in it’s last two outings!).

We didn’t take many pics of the game as it took a long time and we were repeatedly interrupted by curious passers-by asking about the rules set, etc – which we were only too happy to explain and hopefully thereby recruit some new players! So here’s a handful of random pics with a small description of what was going on at the time. I ended up winning in the 7th turn, which was a last gasp deal and much fun was had by both of us!

Sad to say that no painting was done this weekend! I did though glue together my newly purchased Warlord Games plastic M3 Stuart tank that I’ll be adding to my Soviets in Winter Whitewash. The Lend Lease Act meant that lots of older American and British tanks were sent to the USSR to help in their war effort after Hitler kicked off Operation Barbarosa, the invasion of the Soviet Union. The Stuart was used up until the end of the war by the Soviet army and it performed pretty well, though as with most of the Lend Lease kit, Soviet tankers far preferred their Soviet made tanks (T-34, etc). The addition of this light tank will free up points in my lists (My T34/85 takes up a large chunk of every list I’ve made thus far!) and provide a cool little armoured asset for future games. 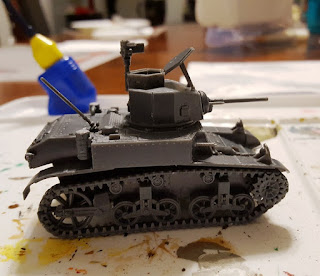