Not One Step Back!

Mojo returned. (Funny how that happens.)


Whilst watching the beginning of 5th season of Star Trek Voyager last night I worked on my Soviet Commissar for my Bolt Action army.

The sculpt is by Warlord Games and came with a choice of heads, which I liked. There were few mold lines to have to clear up and the rest of the details were incredibly crisp and a joy to paint up.

I’d hoped originally to greenstuff a scarf onto him seeing as my force is Winter theme’d but didn’t want to hide any of his nice details so left him be. Instead, his hands were painted to look like he was wearing some leather gloves. That’s Wintery enough, right? 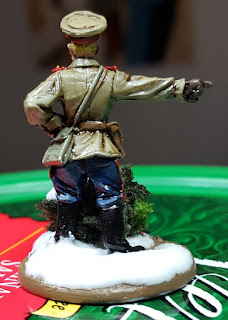 Pics were taken prior to a coating of Testors Dulcote due to the weather once again taking a turn for the sodden. 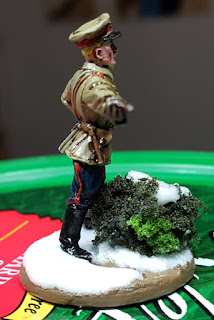 With him done, my tournament force is fully painted!

Next up, some terrain pieces – anyone know how to make icicles in 28mm?